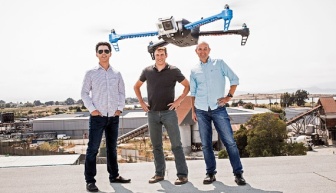 Dronies (selfies with a drone), 90 minute flights from Australia to the UK and zero-carbon cities are just some of the great innovations that we can look forward to by 2021. This technology series showcases some of the best the world has to offer.

In 2007, Jordi Munoz & Chris Anderson met on an online community started by Chris Anderson called “DIY Drones”. Jordi was a 19-year old Mexican immigrant who assembled a drone from parts of a Wii controller and radio-operated toy helicopter. Soon after sharing his discovery on the forum, Chris & Jordi established 3D Robotics to sell drones to the DIY community, however, the co-owners were met with such ferocious demand outside the DIY community that the company expanded into what it has become today.

Earlier in 2015, 3D Robotics raised $50 million in investment funding. Another drone company, DJI, raised $75 million in the same year. DJI, with their popular Phantom drones, are the current market leader and are expecting to make $1 billion this year.

This is just the beginning. In early 2015, GoPro announced that they have joined with 3D Robotics to release their first drone by 2016 and the market loves it. GoPro’s shares received a 6.5% boost on the day of the announcement. In another world first, Singapore Post have announced that they are testing drone deliveries of snail mail.

Governments are responding too. New drone laws have been legislated to protect privacy and security. This includes the extension of anti-peeping laws to prevent unwarranted surveillance and spying, as well as extended civil aviation laws to prevent drones from destroying aircraft and other drones. New laws will also prevent people from destroying/vandalizing other people’s drones.

We are on the cusp of a new age of drones and it is hard to predict just how different our world may look in a few years’ time.

Next: How Space liners may change the way we fly.

Please note: I have no shares in any of the companies mentioned and will not receive any payment for these posts.